Toestand lives thanks to its volunteers, its partners and their various activities. 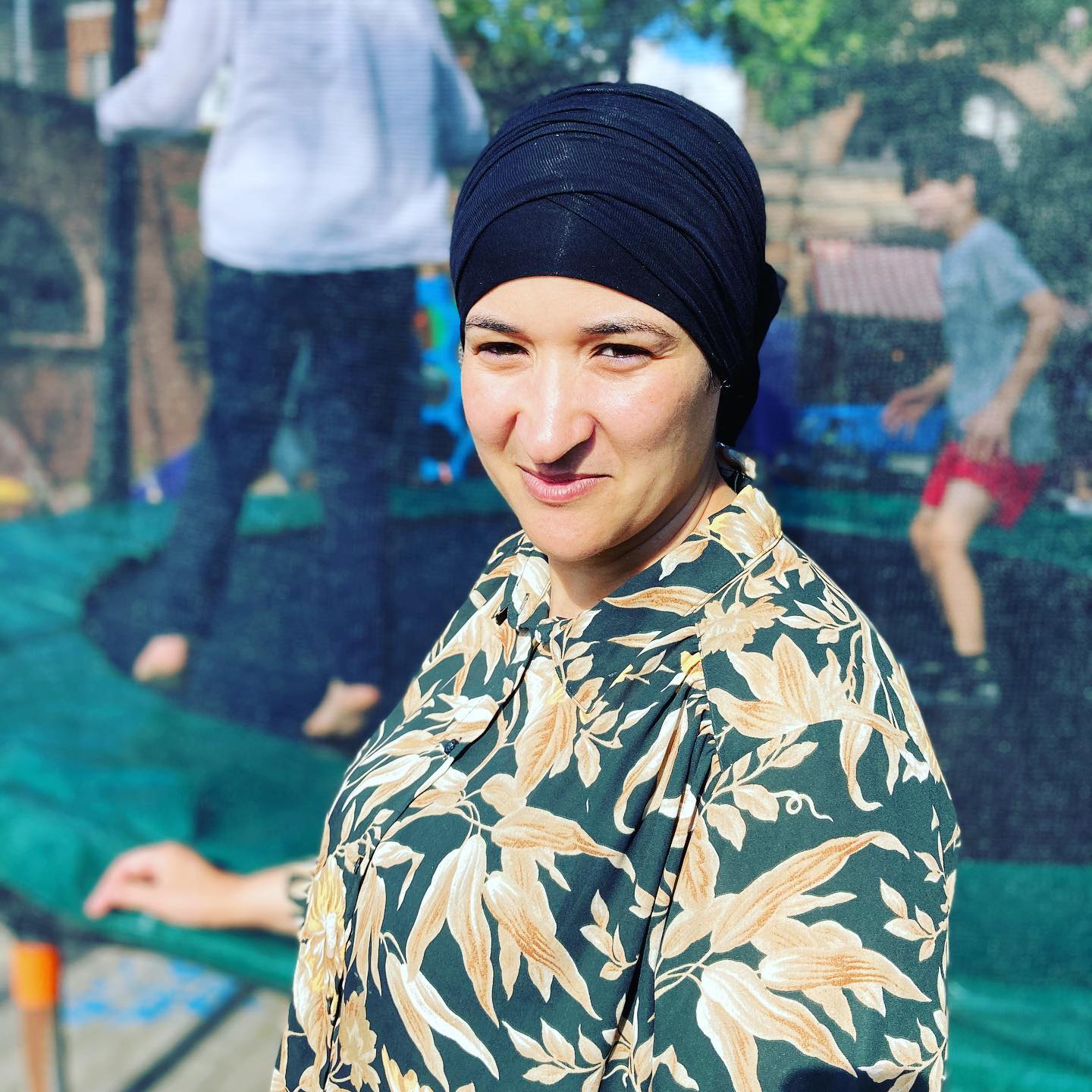 At a small abandoned school in Molenbeek, several worlds collide. Kids are jumping on a trampoline, squatters discuss their daily duties, parents from all over talk about the weather and inside there is an improvised birthday party going. Women chat, laugh. There is a lot of joy. “This is like family, really,” Samia says. She is one of the women behind the organisation Samen Voor Morgen, a group of parents wanting to give their kids creativity. They are a longtime partner of Toestand. “I am very happy. You know, it is hard for veiled women to find a place. There is a lot of prejudice. It is just harder. But here, we find openness, we find eachother.” Samen voor Morgen works all over Brussels and connects parents and their kids. “Our doors are always open to everyone. We think about the future of our kids. We don’t want to repeat what our parents did. You know, our kids hear at school that muslims have a very closed culture. And we don’t agree. We want to open the world to our kids. We want to teach them, through our projects, that we are all the same, no matter what you believe in.” 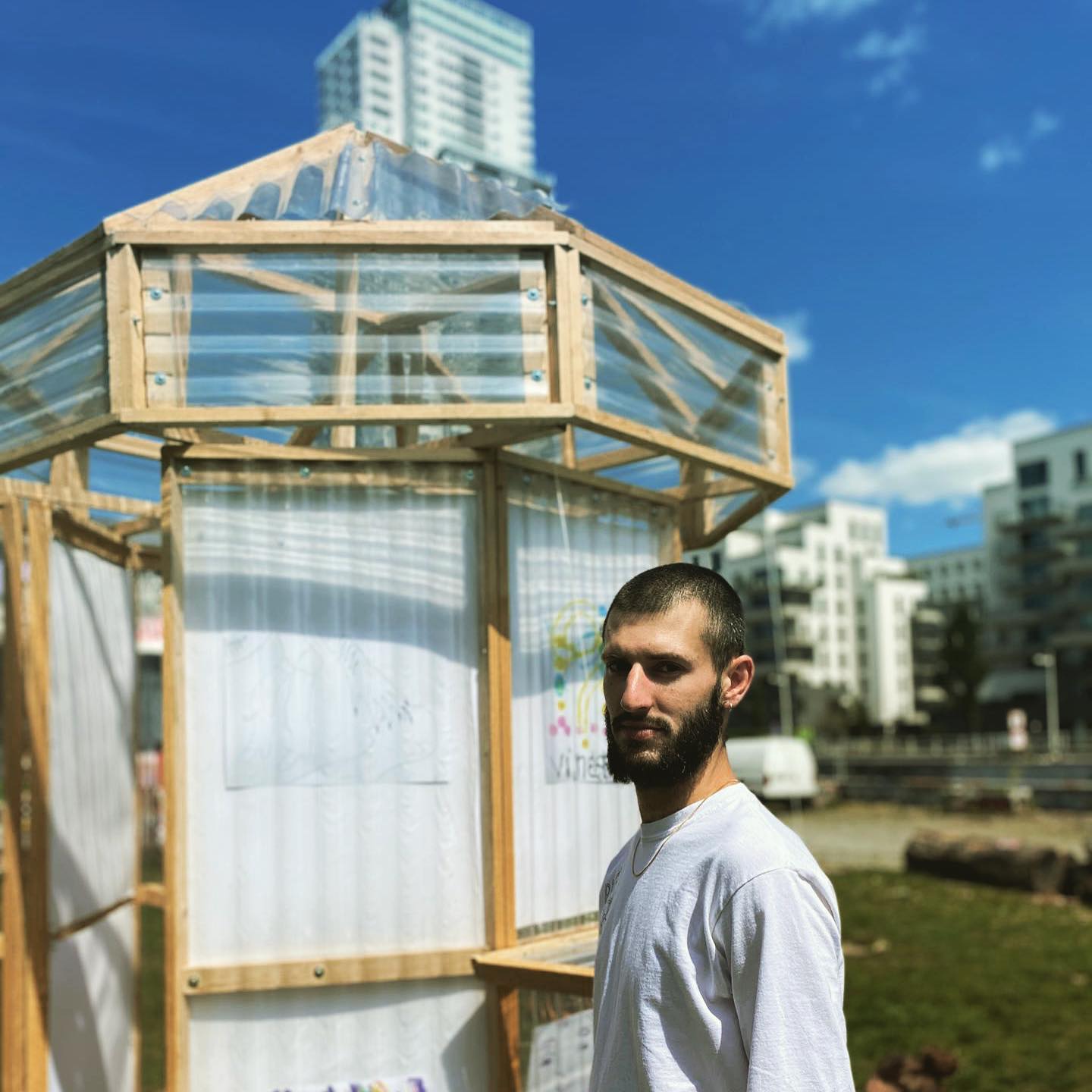 A colossal apartment block towers over Sam, who is putting up his ephemeral art project Kiosk at Allee du Kaai. It is a contrast of biblical proportions, a massive concrete gentrified Goliath against a tiny defiant David made out of wood and plexiglass. Sam is an art student who is fascinated by the temporary nature of Toestand’s projects. He got in touch at Marie Moscou, a temporary occupation in a square in the Brussels’ burrough of St Gilles. “It speaks to me,” he says as he is putting up drawings, pink fantasies and wonderful creatures. He got them from Christina Cerqueira, who asked patrons who wanted to pee at the Beursschouwburg to draw something instead of paying. Her collection is famous and endless. “I thought this was a good place to show them,” Sam laughs. “You know, Toestand and Allee du Kaai are such open cultural spaces. They offer exchange, free workshops and skate space - I like that last, as a skater. They really are alive. And their temporary nature fits in my artistic practice too. I don’t see why we have to keep producing just to gather more stuff. Although I do think it's a pity that this temporary space will eventually have to disappear." The kiosk at Allee du Kaai is open every other Sunday, if the weather allows it. 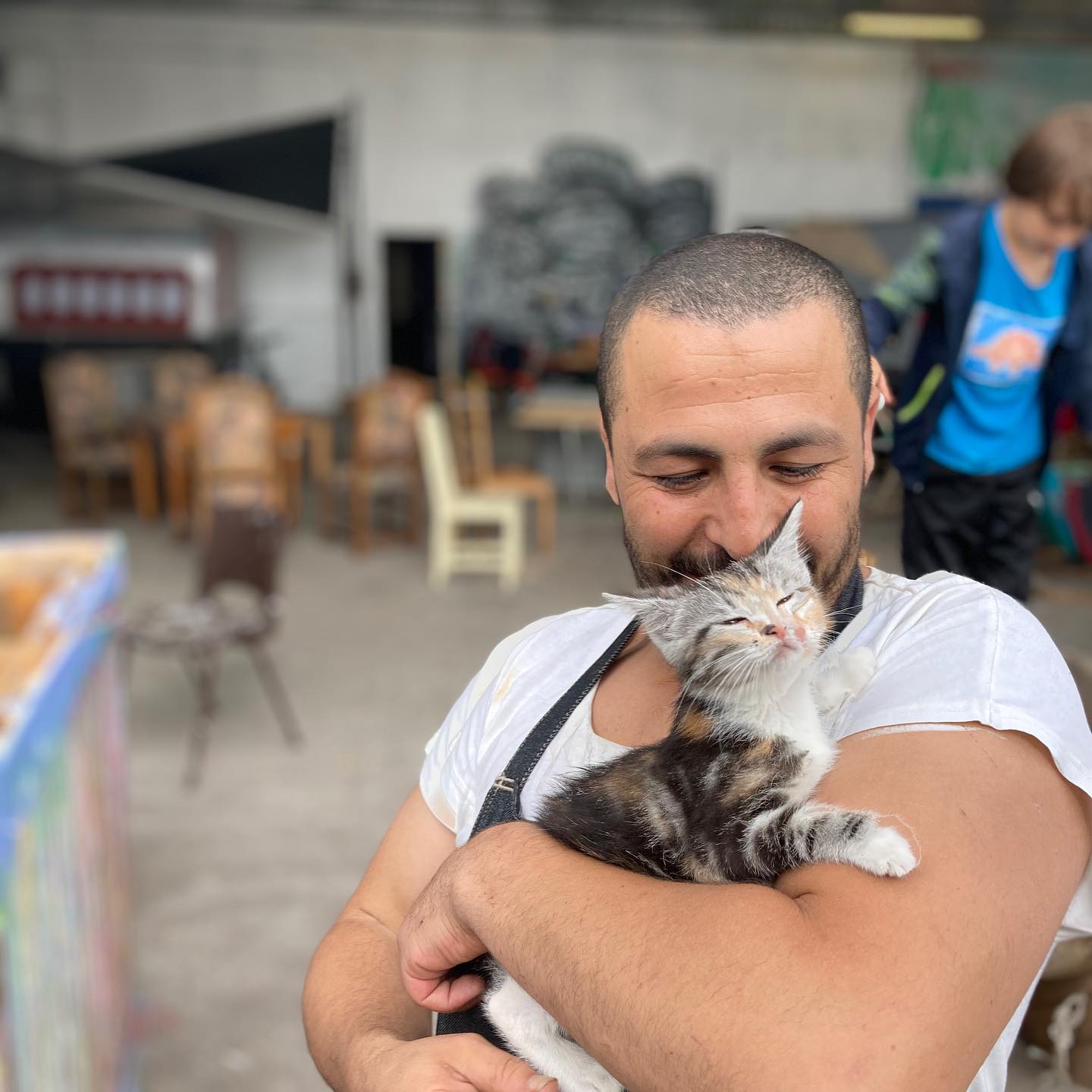 “Calais was a jungle.” Jamal laughs. He is groundskeeper at Allee du Kaai, complete with excellent cooking skills and a three month old hyperactive cat called Luna. He moved to the camp in Calais after a short spell in Brussels, and worked there as a translator and a cook. “Calais was not a place to live. People lived on the beach, by the sea and cold winds, constantly surveilled by helicopters. It was difficult.” Eventually he moved back to Brussels and lived in several squats before finally finding peace at a Toestand project. “What I  found there? Peace. I could not find peace at the squats, it was not a place for me. This is a place for me. I really needed contact with people, a place where I could express myself and put my energy to good use. I cook, I help out here and there. The mentality here, the respect for one another, really put my mind at ease. You know, you can feel a lot of anger and hate, I get that. But there is humanity and kindness in everyone, always.” He does not think about the future that much. “I do not know what is going to happen tomorrow, I accept what is going to happen. I am talking to you now, but maybe tomorrow I will not be here anymore.  ‘J’aime recevoir l’hasard.’ But right now, I feel good here. I feel the support of everyone around here, people help me, respect me. I am content.” 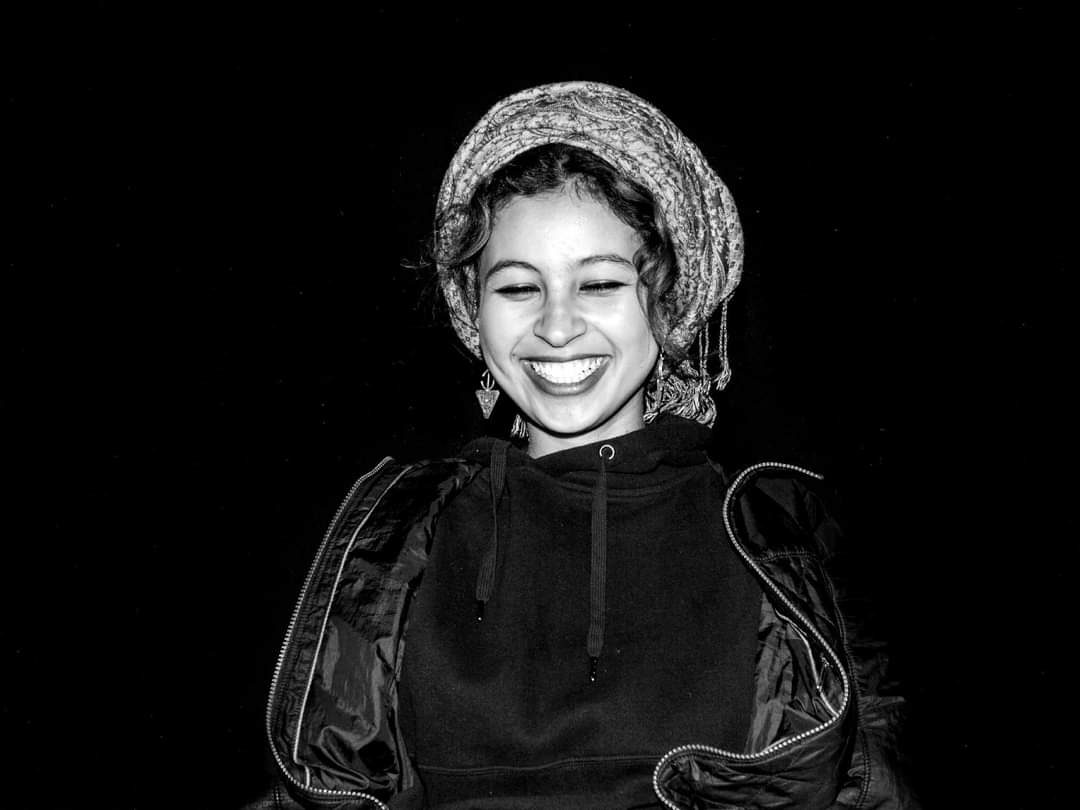 "Allee du Kaai is 'mon petit bijou',” says Chakri Fatima (Fati) as she is preparing to go skate with ‘skate pour filles’ in Anderlecht. She grew up around the corner from ADK so the place holds a special place in her heart. "What makes it so special is the openness of the place. The people of Toestand & ADK really accept anyone as they are, there is no judgement. It is a place where you can be yourself." It started a couple of years ago, when she helped install a mini skate ramp, which evolved into a hyperdiverse skate scene. "First came the punks, then the Flamands, then the skater girls and now it's a place where kids come skate and be themselves. That mix of people is why I love it there so much.” 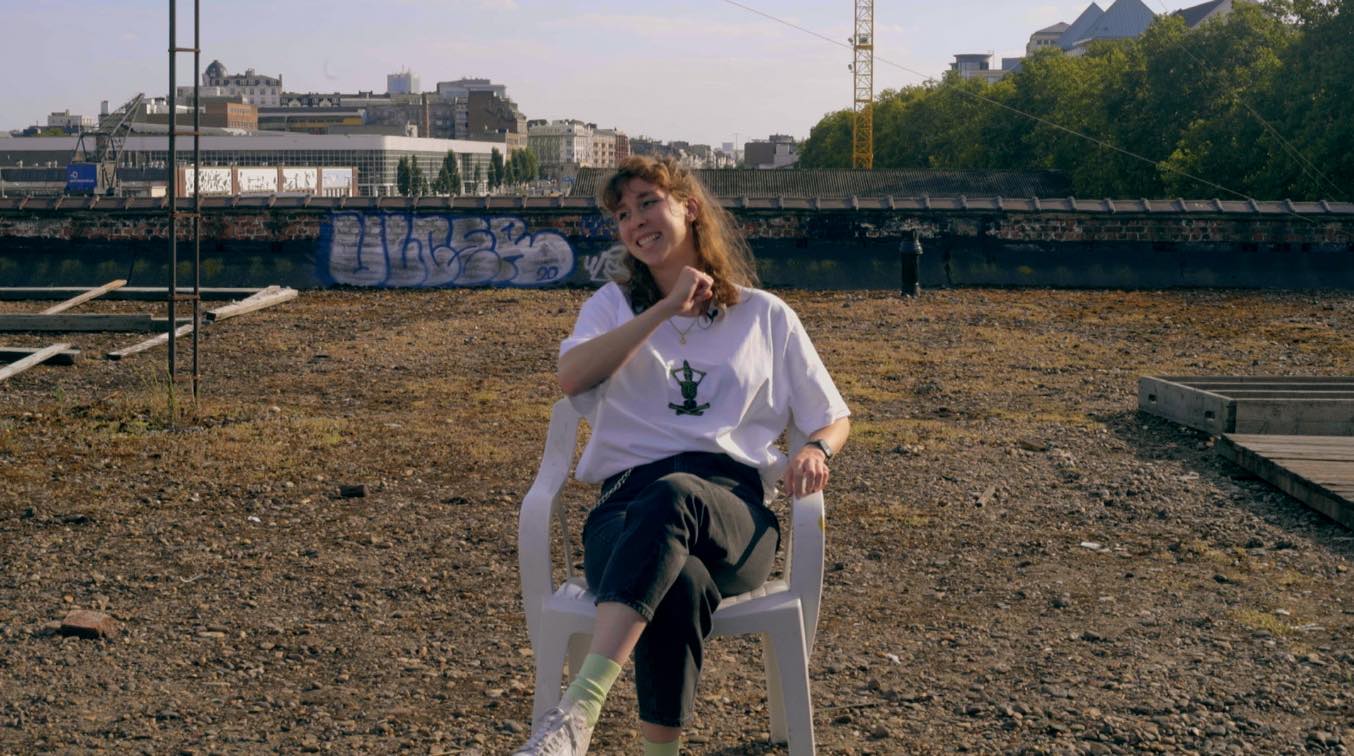 “This is one of my favorite parts of the city,” Ila says as she overlooks the Canal on the rooftop of Allee du Kaai. She’s shooting a short film here. “In a little while, this place won’t exist anymore. So I want to capture it on film. There’s something magical about capturing the ephemeral like that.” Like a lot of people, Ila found her way to AdK through skating. She got involved and found her home there. “It really is like a little family, une petite famille,” she says. “And it’s inspiring. The entire world is so depressing and discouraging for young people like me, the constant rejection really gets to you. But at AdK I found real people who taught me that anything is possible, that there is truth and real acceptance. It really is magical.”

Is Toestand for Everyone?

Allee du Kaai will be transformed into a one-day museum!